This is a blog about cephalopods, a group of marine animals which includes octopuses, cuttlefish, and squid. The aim is to explore some ideas about their bodies, brains, and minds, especially from an evolutionary point of view.

(Well, the scope of the website has now broadened. The original plan was to focus on cephalopods, but now it also covers a lot of other animals. Anyway…)

Why spend so much time on these particular sea creatures?

Cephalopods are fascinating and beautiful animals. Cuttlefish and octopuses can change their entire body color in less than a second. Their skin is a living video screen. They’re also significant animals in another way. Beneath their colorful surface, many cephalopods have large brains. This shows up in their complex and enigmatic behavior. They are curious about people, sometimes friendly, and often seem to show quirks of individual personality. What makes all this especially remarkable is the evolutionary distance between us and them. Cephalopods are molluscs. Their relatives include oysters, clams, and snails. The design of their bodies and brains is entirely unlike ours.

In biology, the relationships between different species are often represented with the idea of a tree of life. This tree represents the evolutionary distances between all the different kinds of life on earth. The vertebrates form one branch of the tree. That’s where we find nearly all the animals with large brains, including humans, other mammals, and birds. In evolutionary terms, these are all cousins. Although a human is obviously very different from a fish or bird, they’re built on the same general “body-plan.”

Elsewhere on the tree there is a huge range of invertebrate animals – ants, worms, clams, butterflies, jellyfish, anemones, snails. In this region of the tree there’s only one small branch where large brains have again evolved. This branch contains the cephalopods. (For their exact location on the tree of life, go here.) Large nervous systems evolved separately on our branch and their branch, and nowhere else; this makes cephalopods a “second experiment” in the evolution of large brains and complex behavior. Meeting a cephalopod is probably the closest we can come to meeting an intelligent alien.

An octopus looking back at you: 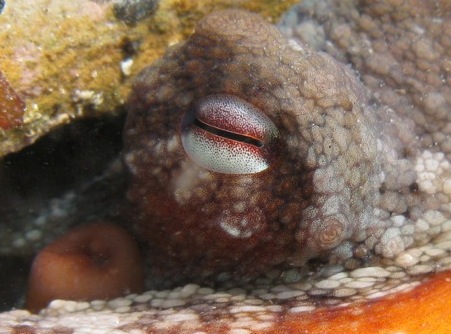