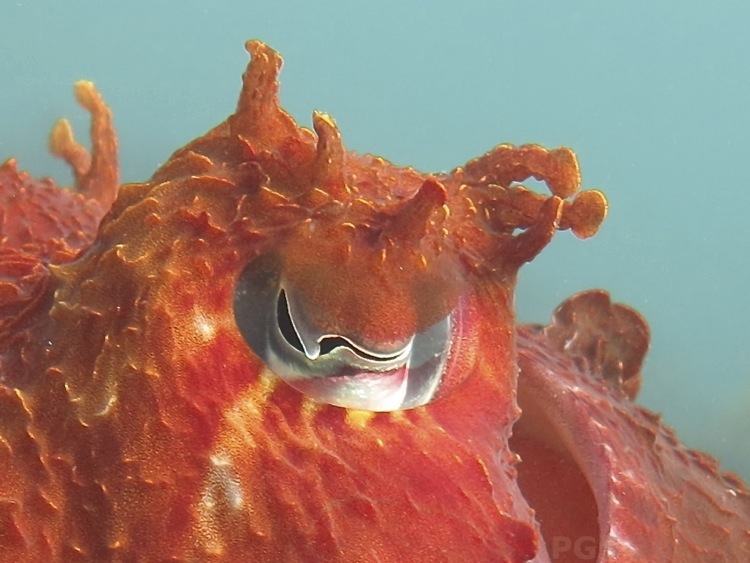 The color changes of Giant Cuttlefish are endless and mesmerizing. These animals also change the texture and shape of their skin, bringing it suddenly into folds and spikes. They can sprout rows of raised plates down their back, like an aquatic stegasaurus.

The folds of skin are called papillae. These spikes and pennants are especially prominent near the eyes. The literature I’ve seen does not make anything of this, but to me it seems likely that this has to do with the fact that other animals, for good reason, tend to watch the eyes: dramatic shapes there will have impact on an observer. 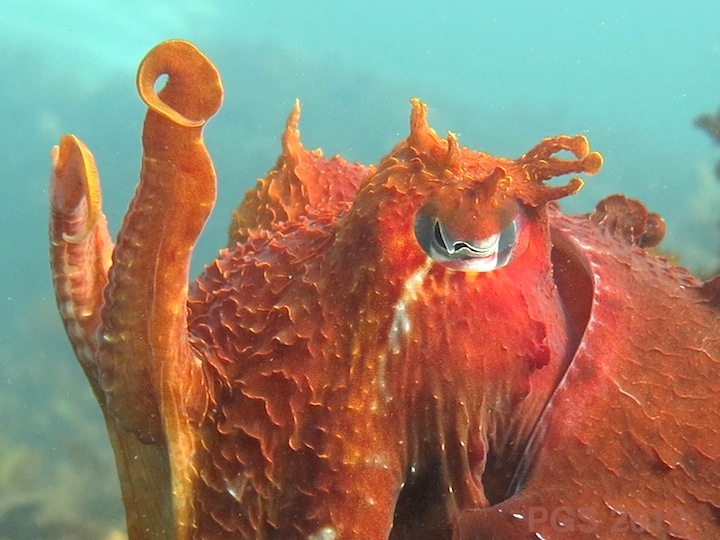 Alternatively, the concentration around the eyes might be incidental – as vision is so important, that area may just have a lot of muscle and nerves around it, with the papillae being more striking as a byproduct. (Giant Cuttlefish do shift their eyes when they are looking at something. They also blink (and, I think) wink.)

For whatever reason, a Giant Cuttlefish’s eyes often have spikes, folds, and little towers coming and going around them. Papillae is the standard term, as I said, but it’s used for the folds all over a cuttlefish’s body. There should be a special term for the ones near the eyes. Neurobiologist India Morrison came up with “eye-spires.” Her son Hector, age 4, suggested “eyebrow fingers.” This second term, as the Morrison team note, can be readily expressed in biological Greek, as ophrudactyloi.

How do eyebrowfingers work? A paper came out earlier this year about them (or at least, about cuttlefish papillae in general), by Justine Allen and her co-workers at Brown University and Woods Hole, using a range of different microscopes to look inside them. 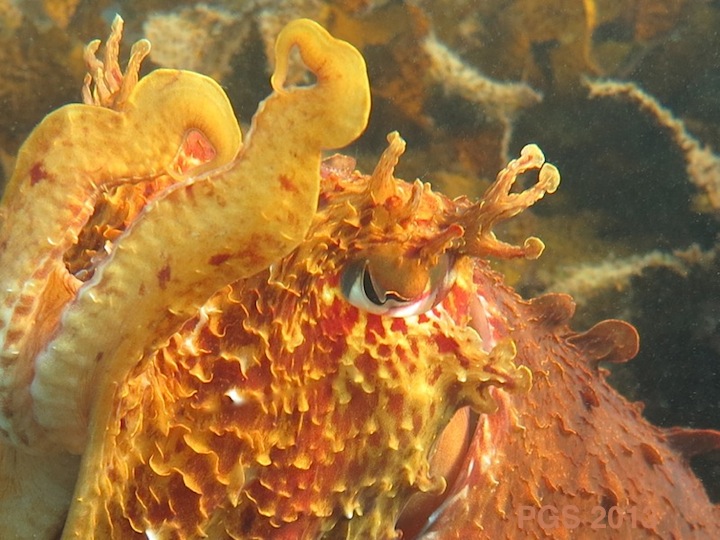 First, this is not a situation where any bit of skin can be inflated and sent upwards, by a suitable contraction of vessels. Instead, inside each ophrudactyl there is a special arrangement of muscles of several kinds. One set of muscles are ring-shaped. When they contract, material inside the ring is forced upwards into the spire. Fluid also tends to be held in the cavity that results. Other muscles, running from center to edge, adjust the shape. Here is one of their illustrations, looking at a spire from side-on:

This article does not associate papillae with signaling; it emphasizes their usefulness in camouflage. The authors say that signaling behavior tends to be associated with smooth skin, and this includes the skin seen during displays intended to startle predators. The exceptions are warning displays from cephalopods that are toxic or probably toxic (the blue-ringed octopus and the flamboyant cuttlefish); in those cases the papillae are prominent.

I suspect that eye-spires in Giant Cuttlefish (which are not toxic) do have a signaling role. I have quite a few photographs of cuttlefish in dramatic arms-raised poses, with eye-spires also aloft (another is here). I think they are part of the display. As I said above, the concentration of high spires round the eyes might be there for that reason. It may be replied that a concentration of papillae round the eyes makes sense on a camouflage-only view of their function; as eyes are conspicuous, it is not easy to camouflage that area. This would not explain the fact that the spires are extended during what I take to be displays. Yet another possibility, again, is that all this is an incidental byproduct of the complex musculature in that area, and the spires get elevated during arms-raised displays as a byproduct of all the other activity going on. I’d put my money on the first option. 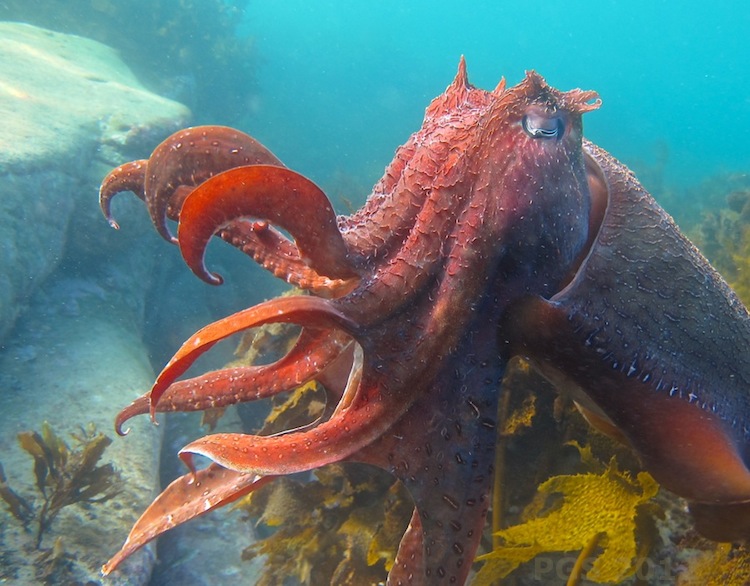 Notes: For contrast, a shot of a Giant Cuttlefish in ‘smooth’ mode is here. (I don’t know if this is the same individual.)

The close-up photos above haven’t had their colors adjusted, and were taken in natural light (no flash). In the last shot I’ve brought the cuttlefish up a bit out of the background. (Nikon, by the way, have just released the first waterproof digital camera with interchangeable lenses. Most of the photos on this website were taken with Canon cameras (plus one or two Olympus shots), but there is no sign of a competitor from yet. Come on Canon, make us a waterproof camera with a large sensor and a fast prime lens, or lenses.)