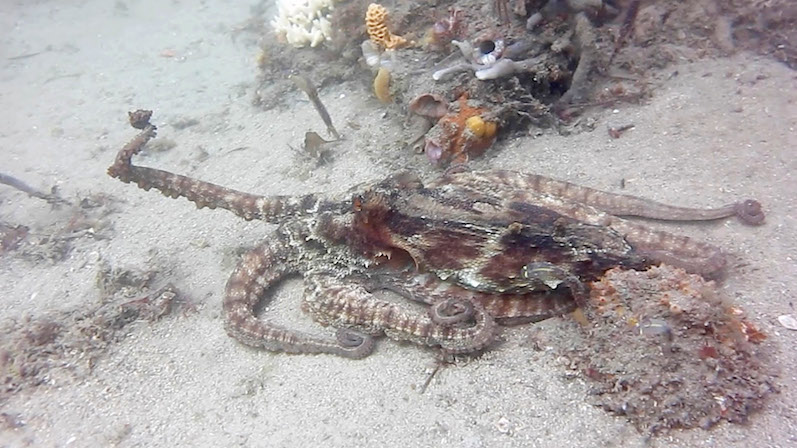 While diving at Nelson Bay last month I came across this octopus roaming around. It was a large one, hunting among sponges in the late afternoon. At one stage while crossing an open area it began to move in a way I’d not seen before. It crawled along flat to the ground, with one arm – the left first arm – held out very straight, with the farthest part arranged in an upward spiral or helix.

As I say, this was new to me. This species often tends to move in – no offense – a sort of chaotic amble, with arms all over the place. When things get serious they use jet propulsion. This gait looked like something with a definite explanation. The obvious hypothesis is that it’s some sort of mimicry, imitation of something less edible. But who else moves along like a spirally rhinoceros, or a benthic narwhal, and might be worth imitating?

Here’s the video from which the photo above was taken:

One thing this behavior reminded me was some video I saw shown at a talk by Crissy Huffard, an octopus expert working in Indonesia and California. Here’s some footage of hers of an Indonesian species, Abdopus aculeatus:

The video is notable first because the octopus is walking on two legs. It’s also doing so in reverse  – backwards bipedalism. But you can also see spiral positions held in several of the other arms. All this is probably in the service of camouflage, and more specifically, the aim may be to look like a piece of seaweed drifting across the bottom.

If so, it seems that the next comment to make is that Crissy’s delicate Indonesian octopus does look like a bit of seaweed, and the great big Octopus tetricus above does not look much like it at all. Octopus experts always say at this point: the fact that it looks that way to a human does not imply that it looks that way for the observers for which the display is intended, predatory fish. Fair enough. It might instead be that displays like this work so long as the animal doesn‘t look like an octopus, even if it doesn’t look much like something else – even if there’s no definite alternative being imitated. The rail-like arm certainly seems to fit that possibility. In any case, I’m still pretty curious about the spiral salute.