One of the most unusual scientific works about cephalopods is a monograph – published in a journal, but the size of a small book – that came out in 1982. It was called: “The behavior and natural history of the Caribbean Reef Squid Sepioteuthis sepioidea. With a consideration of social, signal, and defensive patterns for difficult and dangerous environments.” The authors were Martin Moynihan and Arcadio Rodaniche, two biologists working at the Smithsonian Tropical Research Institute in Panama, Central America. 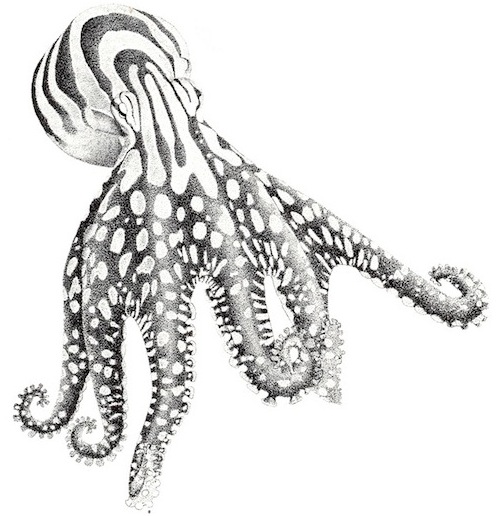 The monograph was controversial for its final chapter, which is about communication. Moynihan and Rodaniche argued that squid have a simple form of language, a language of skin patterns and arm displays. This was an adventurous interpretation of cephalopod communication.

Moynihan and Rodaniche compiled a catalog of the signals their squid seemed to be sending (a plate is here) and looked especially at combinations of signals – colors plus patterns, patterns plus body shapes: “the Fin Stripes and the Belly Stripe may be roughly comparable to adjectives or adverbs….” Their paper is unusual also for its style; it is dense with careful observations, but written with a kind of affection, and occasional emotional engagement with the lives of these complicated, often anxious animals.

The topic of this post is not signals, though. In a chapter that compared the Panama squid to other cephalopods, Moynihan and Rodaniche briefly described an octopus. They called it the “Larger Pacific Striped Octopus,” a species that had not been studied, with no official name. They said they had come across a “colony of 30-40 individuals,” with some octopuses sharing dens. Octopuses were generally believed to be very solitary in their habits, and nothing like this had been seen before.

Arcadio Rodaniche became, during his scientific career, an accomplished artist. Now retired, he has an artistic website here. For the 1982 monograph he drew the beautiful drawing of the mysterious Larger Pacific Striped Octopus which I reproduced above, scanned from the original article. Here is another drawing from the monograph, of displays in their reef squid. 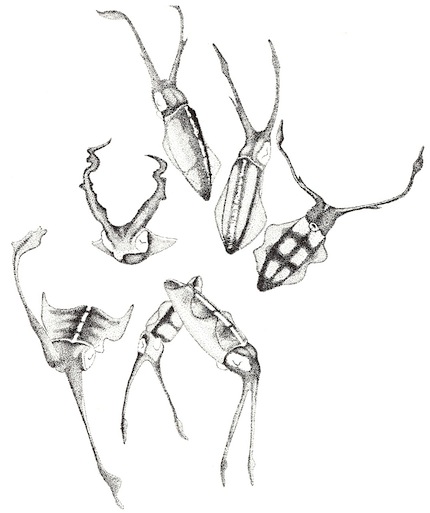 In 1991 Rodaniche published an abstract of a paper describing the striped octopus in more detail. Intrigued by the 1982 description, a few years ago I tried to track down the article, but all I could find was the abstract. And there was no sign of the Larger Pacific Striped Octopus.

No sign until 10 days ago, when Roy Caldwell and Richard Ross of UC Berkeley and the Steinhart Aquarium sent out a press release, posted on the TONMO website. The lost octopus has been found, and for the last year or so Caldwell and Ross have been raising them in the lab. They released pictures and a video (below). The octopus looks just like Rodaniche’s old drawing.

At the moment all we have is the press release with some lab observations. But Ross and Caldwell confirm that these octopuses are gregarious. They are also iteroparous – females do not die after hatching a single brood of eggs, as in other octopuses, but can lay several broods. And they mate “beak to beak,” unlike any other known octopus.

There is also something to think about here regarding skepticism and peer review:

According to Caldwell, Rodaniche’s descriptions of the behavior of this species were so outside the norm of what biologists at the time thought octopuses did, they were dismissed by other cephalopod biologists. Unable to pass peer review, the manuscript was never published and the animal was forgotten. Living LPSOs weren’t seen again until they were rediscovered last year.

What is the relation between these behaviors and those seen at Octopolis, a site in Australia I have written about here where another species of octopus, Octopus tetricus, lives at close quarters? I’ve never seen a beak-to-beak mating in the Australian species. I have seen pairs occupy the same den (in a Sydney location). 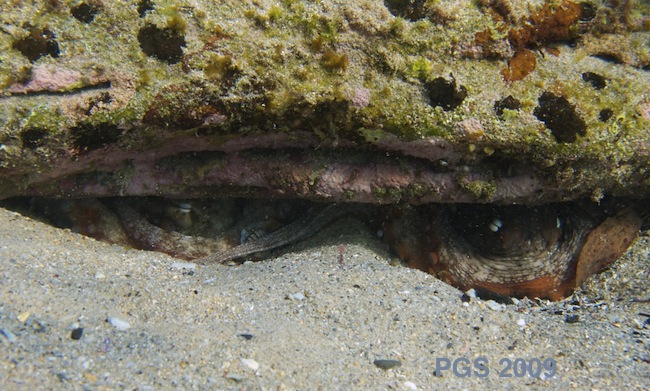 And here is the most intimate association I’ve seen in this species, down at Octopolis: 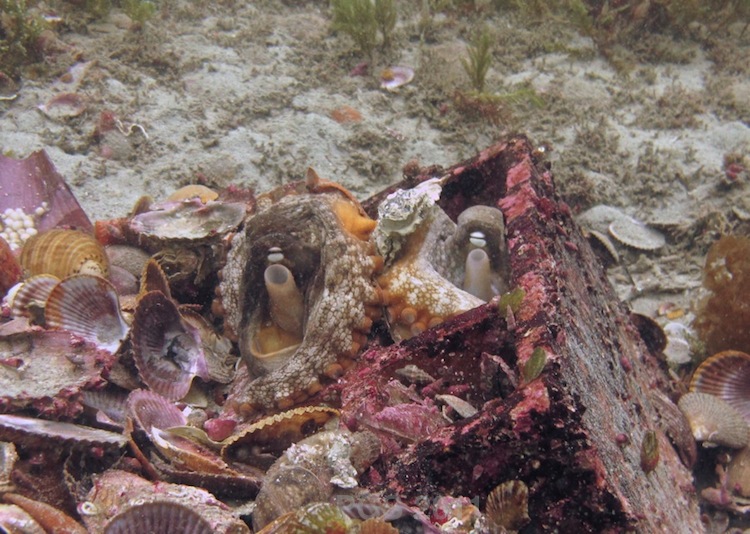 These ones are not mating in this shot, though they did mate later.

Compare the beak-to-beak matings in the Larger Pacific Striped Octopus; this is from the press release, a photo taken by Richard Ross: 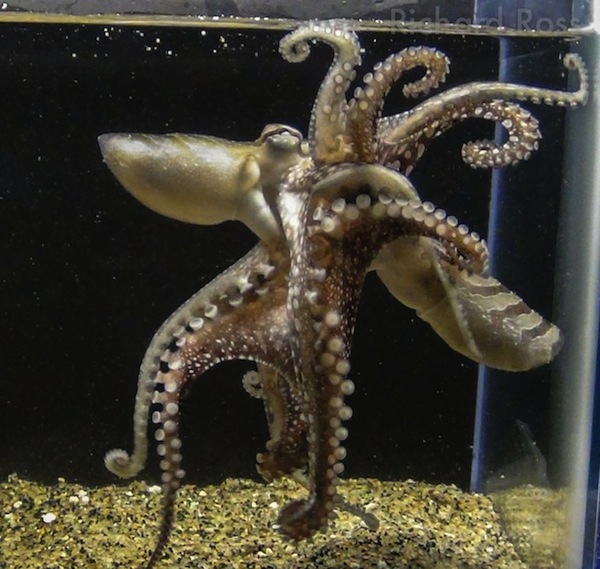 Below, lastly, is the video posted by Ross and Caldwell in their press release. As the photo above and the video show, the lost octopus is also a remarkable looking animal. On the TONMO site there is speculation about whether, given the flamboyant appearance, this may be another octopus harboring serious venom. No one knows yet.

The reference for the 1982 monograph by Moynihan and Rodaniche is Advances in Ethology 59, (S25), pp. 5–150. The drawings above are details of figures in this publication.

Posted in Octopolis, Octopus, The Sexes and tagged octopus. permalink.

5 Responses to 22. The Lost Octopus