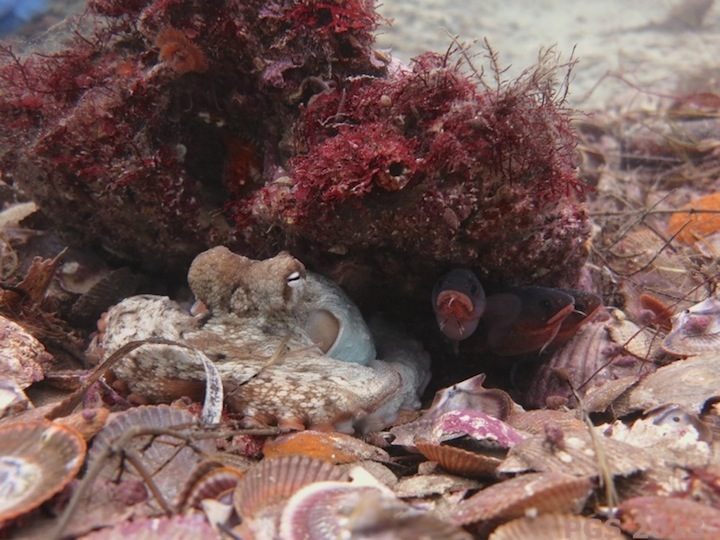 The sea produces strange bedfellows, and I’m rarely able to predict which animals will fight and which will get on well together. Last week we went to visit Octopolis, a site I study with David Scheel and Matt Lawrence, and were surprised to find that at the central den a large octopus was living with three fish. They were there, often as in the photo above, on all three days of our trip. (One of us saw a fourth fish on one dive.)

I thought these were catfish – hence the title of this post – but David reckons they are actually a kind of cod.* The fish were close enough to the octopus for one to be touching it at least some of the time. Together they all sat, peering out. 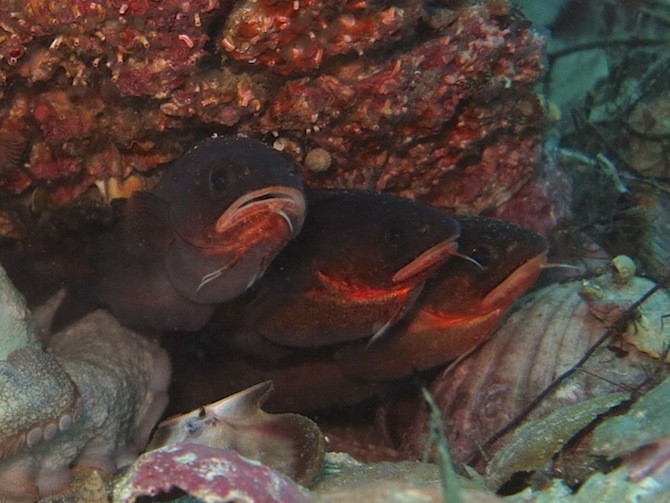 This was our longest and most intensive trip to Octopolis. The aim was to focus not just on the octopuses but on the entire ecology of the site – crabs, small fish, sharks and rays. To do this we teamed up with OceanTrek, one of the best dive boats I’ve been on. 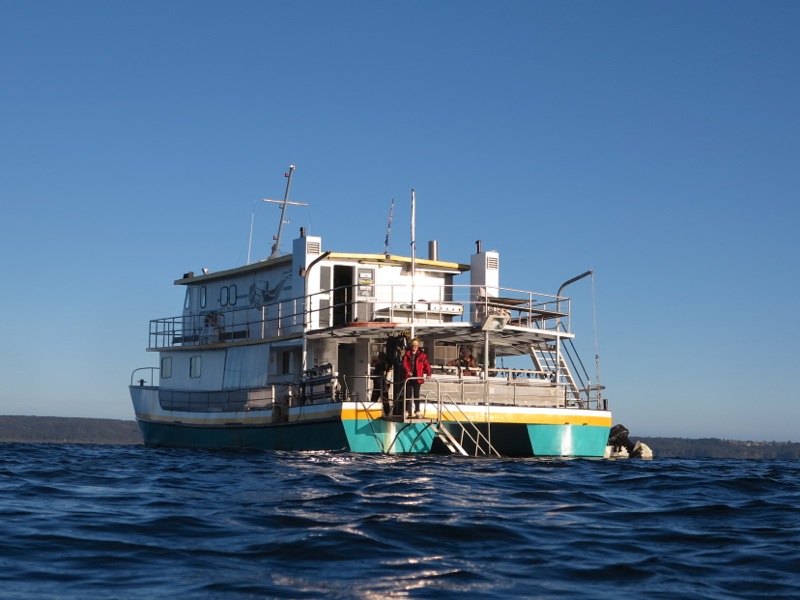 Below on the left are Matt Lawrence and Peter Adams surveying part of the site. On the right is David Scheel, in his envied Alaska-grade dry-suit. 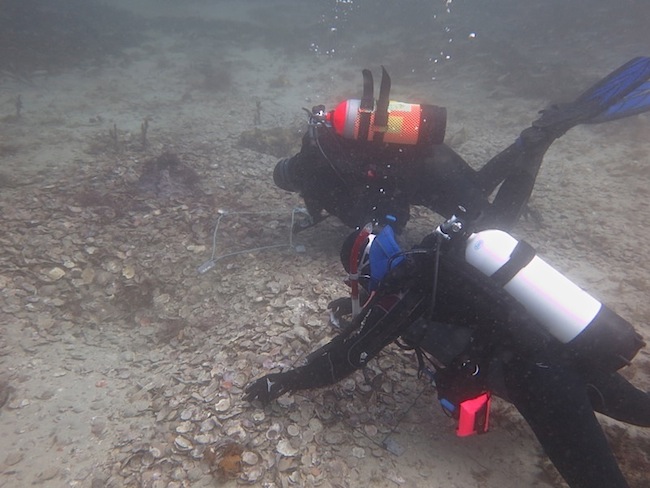 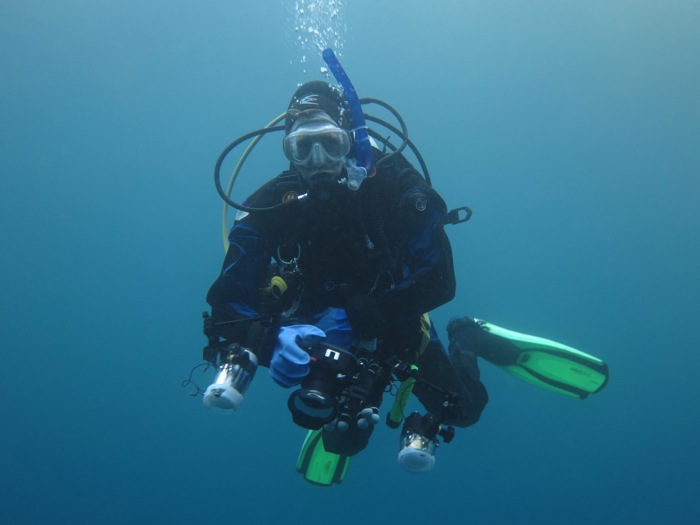 I’ll write various posts describing what we found. For now, what is going on with the octopus and the housecats?

Looking at the picture, one of the first things that comes to mind is that it looks like a giant version of a famous relationship between a vertebrate and an invertebrate: the shrimp-goby mutualism.  Many species of shrimp live in holes with small fish called “gobies” – a hole has a single fish and a single shrimp.  (For images, see here.) The shrimp builds and maintains the burrow; the fish, with its much better eyes, watches for predators. The partners communicate by touch. I saw a pair of this kind years ago in Bali, and they looked very much at home together.

In that case it is clear that both sides benefit, and the associations seem quite stable. According to this paper, the behavior has evolved on the fish side at least twice, independently. Who, if anyone, is benefiting in the octopus-catfish case? The fish are probably getting quite a lot of benefit from the den. Though the central Octopolis den is based on a hard object (probably an encrusted piece of metal), the den is actively maintained by the octopuses. They excavate shells and rubble from beneath it, and we’ve seen that objects at this site submerge in silt if left untended. (Here’s a video, linked to our 2012 paper, that shows some of this excavation, though in that example the octopus is excavating the opposite side of the den from the part pictured above.) So the fish probably benefit from the den, and the den is maintained by the octopus. What might the octopus be getting out of it?

The term “commensal” is used for relationships between organisms of different species where one benefits and the other is neither better nor worse off from the interaction. (Commensalism is contrasted with mutualism, where both parties benefit, as in the shrimp-goby case, and parasitism, where one benefits and the other is worse off.) In this case I suspect that the octopuses don’t get anything out of it; the fish are too tenacious to be kicked out, and the octopus is no worse off for their presence.**

This makes sense, though I wonder whether a large octopus could turn an unwary houseguest into lunch if it chose to, and here it does not choose to. That raises again the question of hidden benefits. Perhaps the octopus could dine on one of the fish, but not without a fight, and octopuses have lots of other food at Octopolis. 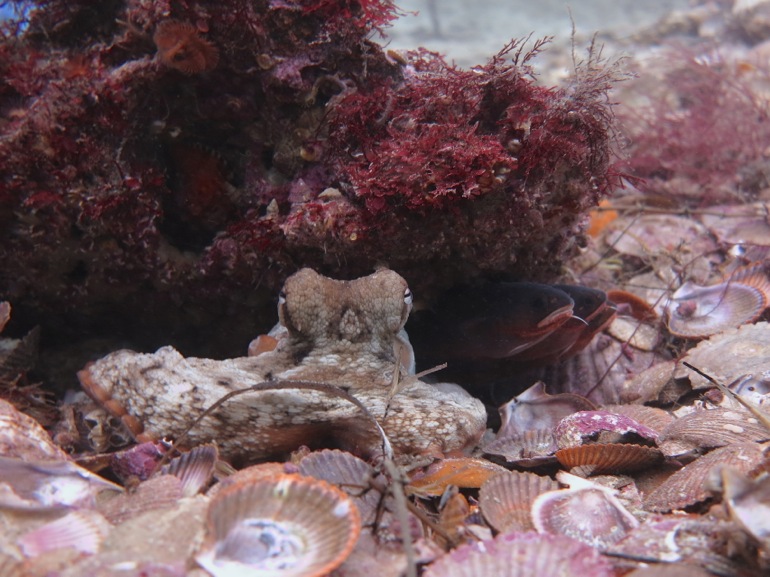 * Pseudophycis barbata, also known as the “southern bastard codling.” For now, at least, I resist changing this post’s title, though I guess they should be called Housecod. Or Housebastards?

** “No worse off…”: at least for now. Things might change if the octopus is a female and starts brooding eggs.

Here is a good blog article by Olivia Judson about the shrimp-goby mutualism and others. (A pdf text version is here, in case the NYT link is unavailable.)

Thanks to Lyn and Mick from OceanTrek, a boat I’d recommend to anyone diving in the Jervis Bay area. Thanks to Peter and Jeannine Adams for their help in the water and out.