Over the past week I’ve spent some time watching an animal that has become my nominee for the oddest-looking creature on earth. 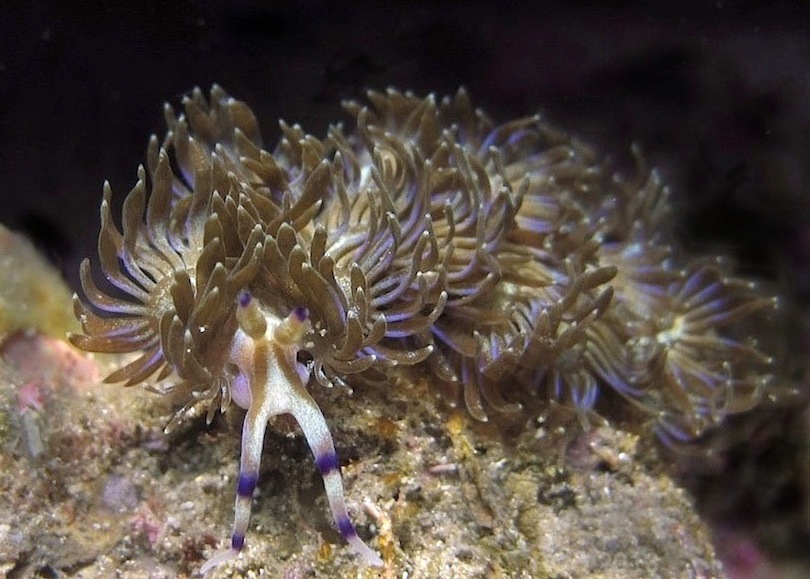 The species is Pteraeolidia ianthina. (I assume the first word is pronounced “tereo-lidia.”) It’s a nudibranch, of a different family from the ones pictured last time. They grow to a few inches long, and their bodies are lined with a regular series of flower-like structures called (I’ve just learned) cerata. Here is a shot which gives more of a sense of their body plan:

And here’s a close-up of those psychedelic appendages: 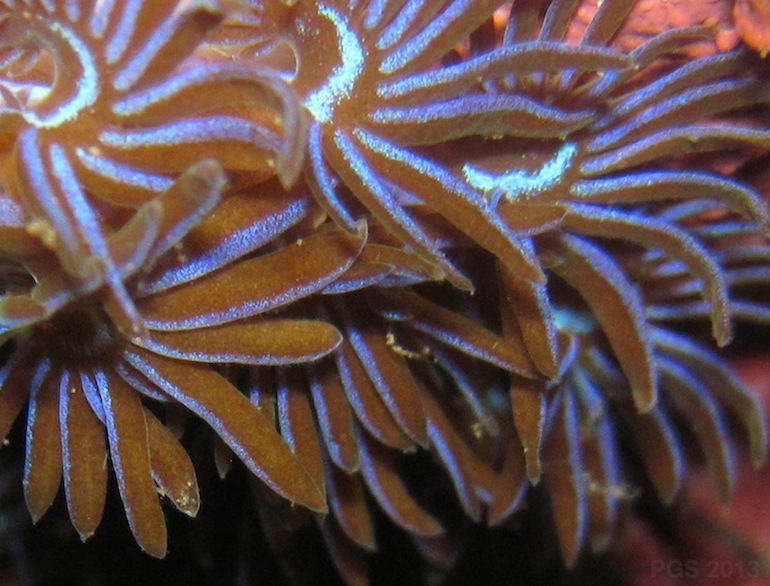 They are hard to photograph because they are not only small but active – continually roving about, poking their heads up, feeling around. 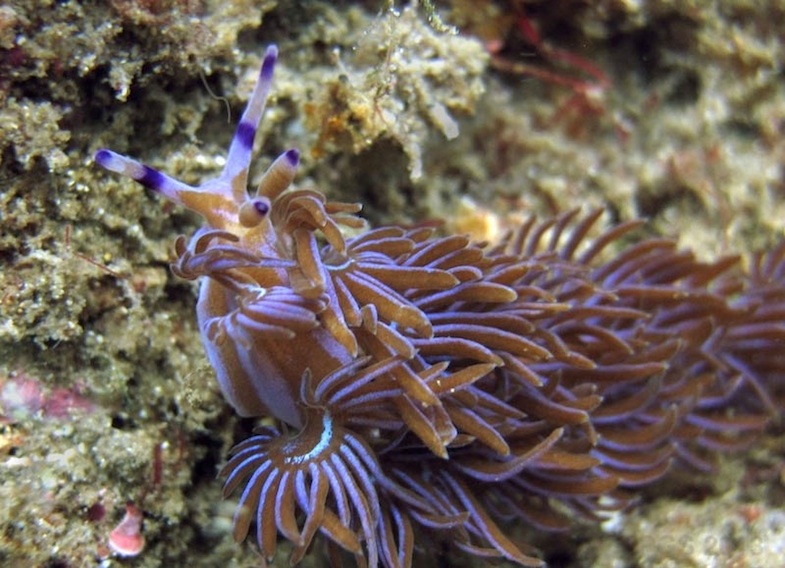 Their own bodies are a challenge in all this activity, as the psychedelic cerata catch the currents and move the animal in a way beyond its control. A Pteraeolidia looks like an eccentric monarch, with various projects underway but encumbered by too many ceremonial robes. “I just know I could get more done if I was not wearing this absurd outfit.” Yes, your highness, but the outfit is also doing some important things for you.

Pteraeolidias harbor and put to use two different kinds of cells gained from outside. They store in their cerata nematocysts, stinging cells, taken probably from hydroids they have eaten (as discussed in the last post). And more impressive still, they store dinoflagellates, single-celled organisms, and use them as photosynthetic sugar factories. Corals do the same sort of thing.

So this animal is a combination of at least three kinds of cells with different origins. There are animal cells derived from the fertilized Pteraeolidia egg; there are symbotic dinoflagellates, which are single-celled organisms, making sugar from the sun; and there are nematocysts derived from other multicellular organisms, which act as stingers.

The result is a beweaponed, solar-powered hermaphrodite. 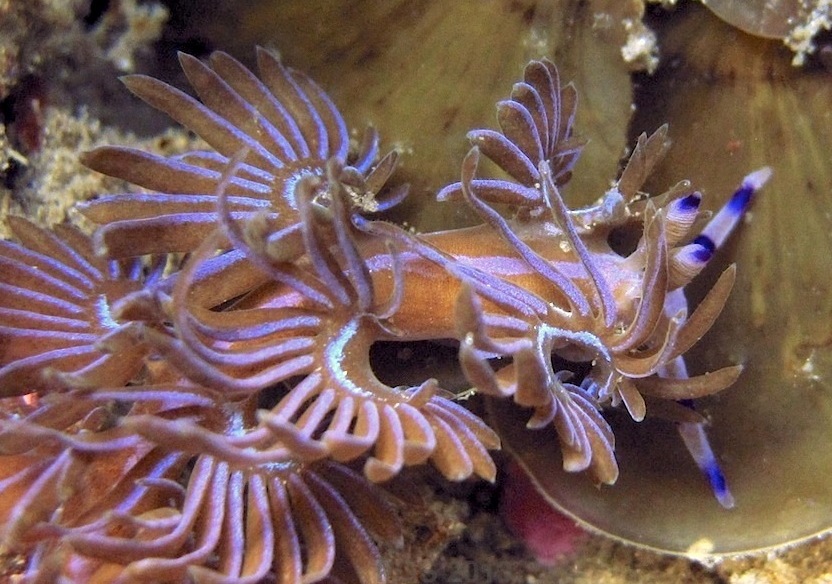 In the comments to the last post there was discussion of how nudibranchs come to be avoided by fish. Pteraeolidias can be conspicuous or camouflaged, depending on the context. I saw one a few days ago sunbathing on a rock face. The huge blue fish below came roaming past. These “blue gropers” feed by biting directly at the reef. 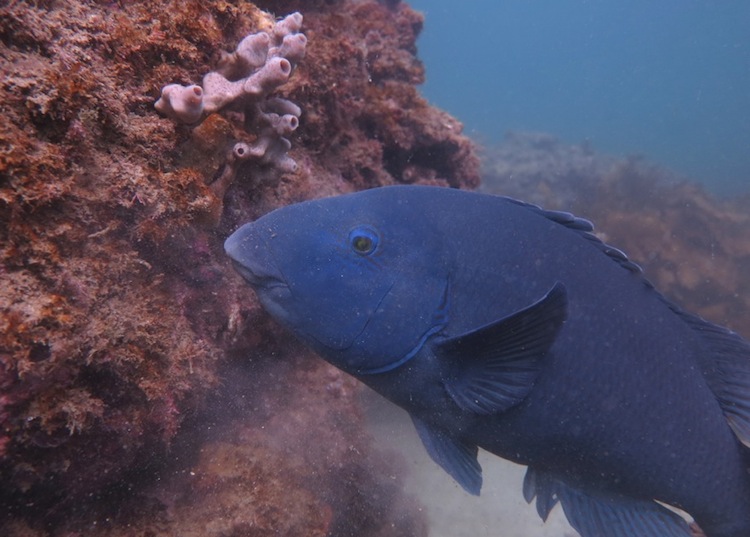 In a big chomp it swallowed the nudibranch – and spat it straight out, in less than a second. (“And the LORD spake unto the fish, and it vomited out Jonah upon the dry land.”)

There he lay. I thought he was dead, or dying. 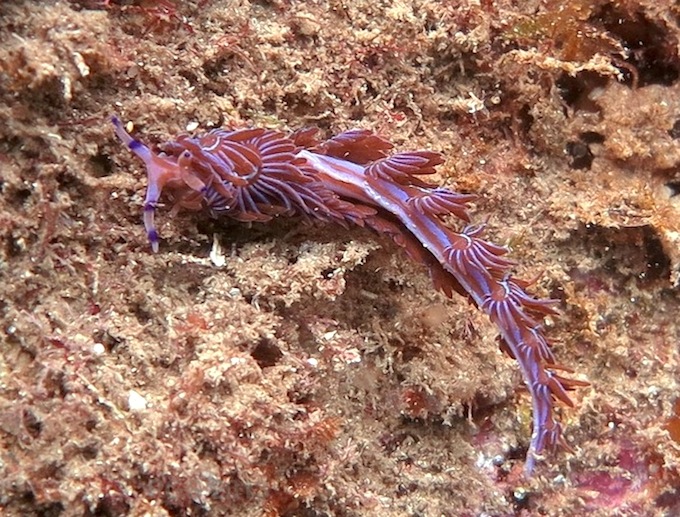 But not so. Jonah recovered, and went off to join his fellows.

His fellows?? Yes, another surprising thing about these animals is that they are sociable and chatty. They spend a lot of time interacting, touching their cephalic tentacles. Here are the two that Jonah eventually rejoined. 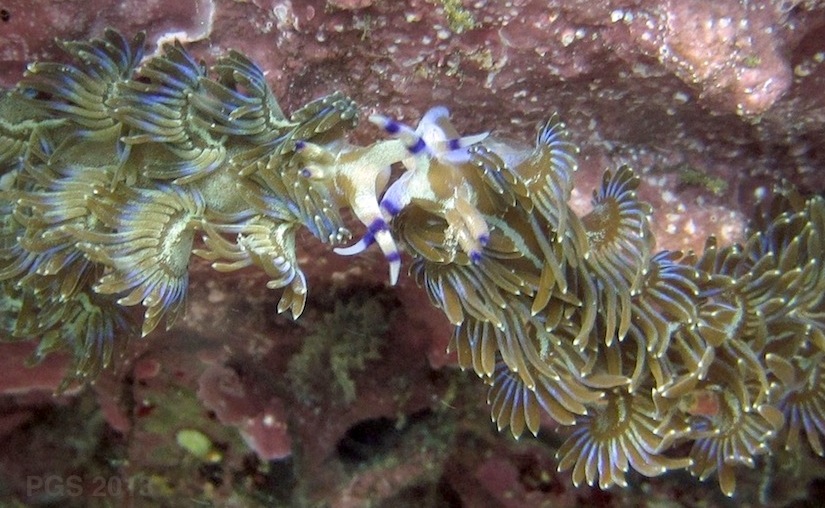 They are also the only nudibranchs known to brood their eggs. I will write a separate post about that side of their lives, after some more time watching them.

1. More on nudibranch solar power here. There has been a lot of recent work on the biological importance of “consortia” made up of cells from different origins. The most famous is the squid-vibrio symbiosis. Hawaiian squid store colonies of bacteria which light up to provide camouflage. I discuss those and others in a new paper. A Pteraeolidia ianthina is also a “consortium” in this sense, though I don’t know how integrated the lives of the partners are. The paper I linked to earlier says: “The nudibranch receives up to 50% of the total carbon photosynthetically,” and that it’s not known whether the symbiotic dinoflagellates are acquired directly from the water or from other symbiont-containing animals that have been eaten by the nudi (as with the nematocysts).

A good paper on the significance of consortia for the nature of living systems, by John Dupré and Maureen O’Malley, is here.

2. Reports are coming in of the first video taken of a Giant Squid in the wild.

Posted in Others and tagged nudibranch, symbiosis. permalink.

2 Responses to 19. The Strangest