This post is about something that has been on a number of websites today. It’s a pretty amazing story. I read about it here. Apparently a diver in Japan came across this structure in the ocean, about 80 feet down. 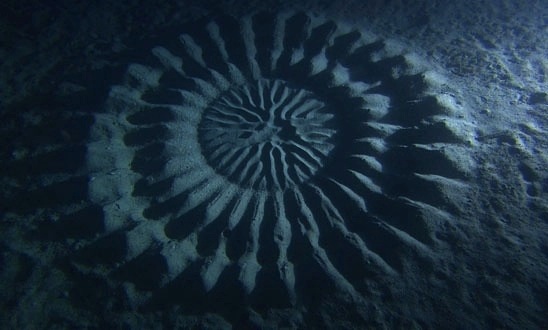 The disc is about 6 feet in diameter. The story has it that the diver, Yoji Ookata, took a TV crew down who left cameras, and it turned out that these structures are built by a puffer fish, just a few inches long, shaping the sand with its body. This shot is from Ookata’s website: 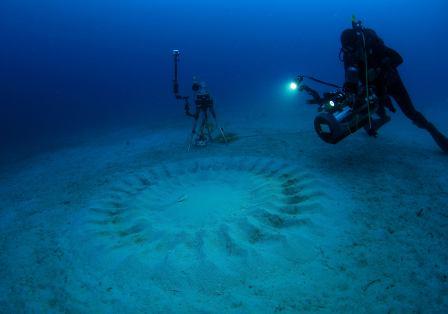 You can just see the fish in the middle. The role of the structure, built by males, is to attract and guide females to the center, where they mate. The eggs are then protected from currents by the ridges.

I wish there were some video fragments online, just to nail it down, rather than just stills. Even the TV show has only posted stills, at least for now. But if this is a little hard to initially believe, who would believe that an amoeba, a single-celled organism, could have built this? 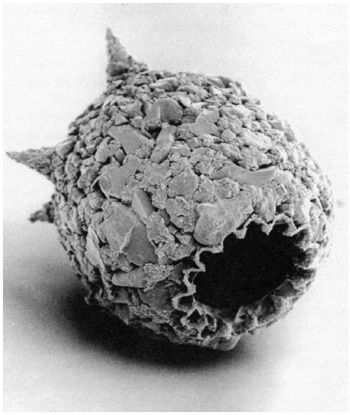 I saw this image years ago but was wondering if I’d merely imagined it, and found it just now at a fine sand-obsessed website. Mike Hansell, expert on animal architecture, tells the story:

It is a sphere composed of a few hundred stones cemented together, on top of which there are seven or eight sturdy spikes, each a cairn of stones, larger ones at the base, smallest at the tip creating a sharp point. At the bottom of the sphere there is a large circular hole ornamented with a pleated collar of particles too small to be distinguishable from the cement that binds them. The diameter of the whole dwelling, for that is what it is, is about 150 thousandths of a millimetre. Smaller than the punctuation mark at the end of this sentence. It is the portable home of Difflugia coronata, a species of amoeba.

An amoeba, as you very likely know, is a single celled organism. The one cell does everything. It feeds, excretes, moves and reproduces and, in this species, it also builds a home. The cell has no nervous system at all, let alone a brain. Can its extraordinary achievement really be said to be building? Well, as the organism’s amorphous bulk glides gently round the bottom of some pond, engulfing food particles and growing, it also picks up tiny sand grains that accumulate as a mass inside it. When it grows to a certain size, the cell then reproduces by dividing its body equally into two. One of these inherits the ancestral home; the other is left the bundle of building material. These stones, we know not how, are then moved to the body surface and arranged to create the distinctive architecture of this species. Just enough particles of the right sizes, big and small, have been picked up to accomplish this.

One more shot of the puffer-fish’s efforts: 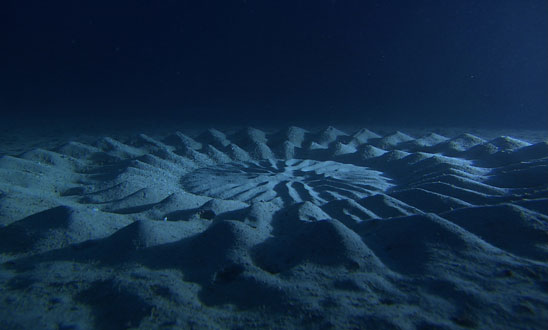 Does this have anything to do with cephalopods? Yes, a little – to be covered in a month or so.

Thanks to Adam See for steering me to this. The images at the beginning and end of the post are from Colossal.

One Response to 11. Architect