An octopus has a big brain, but the brain is not where all the action is. Their nervous systems are built on an entirely different design from ours, and the majority of the neurons (nerve cells) in an octopus – something like 2/3 of them – are in the arms themselves. 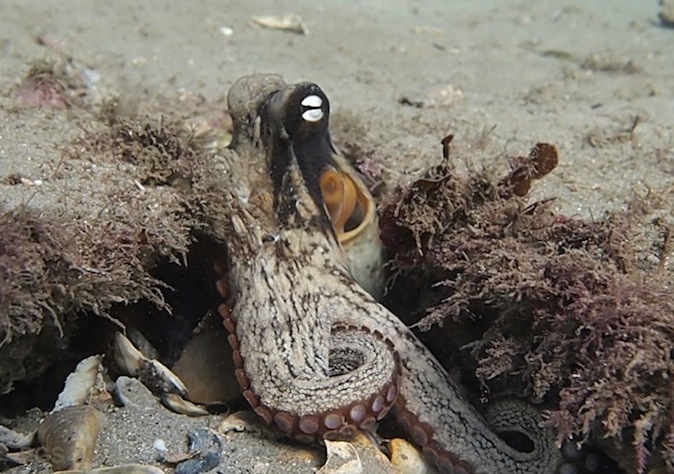 What are those neurons doing? Here is a quote from Roger Hanlon and John Messenger‘s 1996 book Cephalopod Behavior.

I was very struck when I first read this passage, and it is one of the things that make octopuses so significant when thinking about the relation between minds and bodies. If the arms are “curiously divorced” from the brain, what sort of psychological unit is an octopus? How much independence do the arms have? If they have a lot, then is an octopus a collection of semi-autonomous and semi-intelligent parts, which work together in natural settings but don’t form an integrated “self” in the way a more centralized animal does? 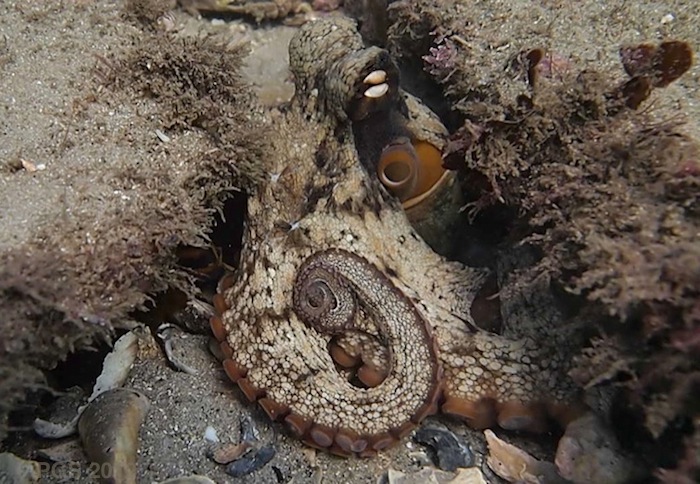 Invertebrate animals generally have less centralized nervous systems than vertebrates; what makes the octopus unusual is its having a nervous system that is both so decentralized and so big. Some philosophers who work on mind-body issues would say it’s a mistake to read too much off the layout of the nervous system (Andy Clark, Alva Nöe, Evan Thompson). The whole of an organism’s body, and the feedback it engages in with its environment through the senses and action, go into determining the organism’s psychological features.

In a later post I’ll discuss the best experiment I know of that bears on these issues, published last year by Tamar Gutnick and her colleagues at Benny Hochner’s lab in Jerusalem. It shows that a radically disunified view of the octopus is not right – “divorce” between arms and brain is too strong a term. But it suggests a mixed view of octopus agency, one in which there is a combination of top-down control of the action, along with some delegation of details to the arms themselves.

Here is a video (1 minute) taken a month or so back in natural conditions. Watching it, I go through a kind of gestalt-switch, back and forth, between seeing each arm as an autonomous explorer and seeing them as parts of a unified animal. At a few points the octopus pretty clearly appears to send an arm along a definite path. But the last part of an arm sometimes seems to have its own ideas.

7 Responses to 7. Think With Your Arms