Whyalla is an industrial town on the southern coast of Australia. Every year, for a few months between May and July, Giant Cuttlefish arrive and congregate in a patch of shallow water just out of town. This is the only known gathering of large numbers of cuttlefish, and the results are like nothing else on earth.

It’s not known how far they are coming from, and why they choose that particular area, but they have appeared reliably every year, in hundreds of thousands, along the same few miles of coast. They gather to reproduce; those months are a continual melee of courting, fighting, mating, and the laying of eggs, all accompanied by an unending chorus of color changes.

Except for this year.

This year the cuttlefish never arrived. Or rather, a handful did, but a tiny fraction of the usual numbers. Everyone has been waiting since May to see if they would turn up late. But now, in July, it looks clear that they are not coming.

No one knows why this has happened. I’ll go through some possibilities below. First, some more of the story of the Whyalla cuttlefish.

Locals had known about the annual cephalopod get-together for years, and used the cuttlefish for bait when fishing for a fish called snapper. Around 1995 the snapper fishery declined, but a few fishermen saw a new opportunity. They began targeting the cuttlefish aggregation from boats, hauling thousands of the animals out of the water to freeze and ship to Asia, where there was a new market for the meat.

Tony Bramley owns a commercial scuba service and dive shop in Whyalla. He followed the growth of the cuttlefish catch in the 90’s with increasing alarm. At this time Karina Hall was a graduate student in marine biology, working in a research institute. She’d become interested in the large cuttlebones washing up on South Australian beaches at the end of each winter. As the Whyalla fishery expanded, Hall was asked to look into it. She quickly realized the fishery was anything but sustainable. Bramley and Hall teamed up and in 1998 they succeeded in establishing a ban on fishing the cuttlefish during the breeding aggregation, a ban that has been renewed continually since then.

Here is another cuttlefish in Whyalla colors: 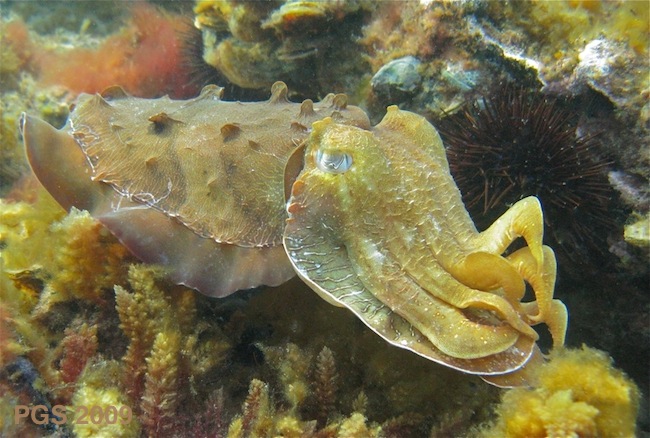 And this next one seems particularly eccentric. (Actually there are two in the shot.) 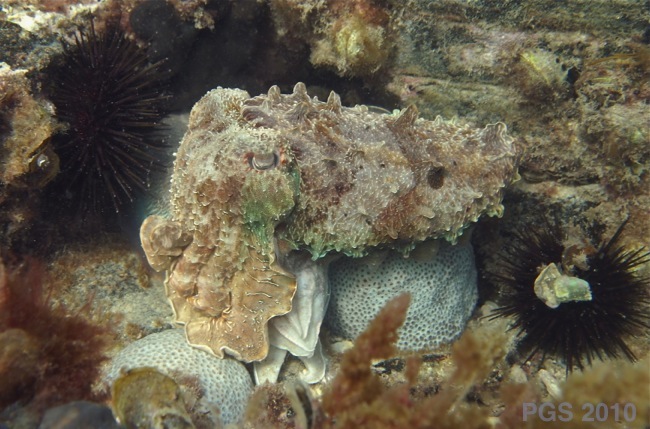 I went to see the cuttlefish in 2009 with another philosopher, Stefan Linquist, and in 2010 with my wife, Jane. The cuttlefish were around us in thousands. At first it all looks like multicolored chaos, and then you start to see a pattern. The largest individuals are males, and some of these are two or three feet long. The females are smaller and hold their arms more compactly. Many smaller males also roam about hopefully. A large male will try to act as a “consort” to a female, monopolizing her and keeping other males away. When a rival male approaches, the consort and the intruder begin competitive displays. The two males will lie side by side and stretch out as far as they can, blazing with skin patterns. It looks like a sort of competitive yoga. This is what you can see in the first photo in this post, and here is another example, on video.

What has happened? First, the numbers were down last year as well. There were still quite a few in the water, but maybe 25% of what had been seen a few years back. This year the numbers plummeted to far fewer than that. The cuttlefish were already the center of controversy due to the mining company BHP Billiton’s plan to build a huge desalination plant to feed water to a mine about 200 miles inland. The plant will be right near the breeding grounds. Scientists are concerned that the highly salty water pumped back to the gulf will keep away the cuttlefish or harm the eggs. Like many people, I don’t understand why the desalination plant could not be built somewhere else, even if it costs a bit more in pipe (I think BHP can afford it). This can’t be the immediate problem, though, as the desalination plant has not yet been built. There have been leakages from some of the industrial plants along the gulf from time to time, but I’ve not heard reports about this recently, and I’m sure someone has had their eye on it. It is possible that fishing boats are again targeting the cuttlefish. Tony Bramley said last year that he thought that fishing of several kinds was again having an impact.

Yet another possibility is that a natural predator has shifted its hunting range, increased in numbers, or both. Possible culprits are fur seals, which live not far away and according to recent reports have been roving into new areas. They might be killing the cuttlefish before they come in to the breeding grounds.

All this raises questions about the beginning of the aggregation. How long have regiments of cuttlefish been coming in to this site, and why haven’t predators been rampaging through them before now? One local news story here suggests that the large aggregations are a fairly recent phenomenon – there were many fewer cuttlefish in the 1970s. (The source for this claim is someone who seems very much on the side of the fishermen, however, and I’m not sure what to make of him: see here.) It is possible that a window of safety between various threats, both human and non-human, allowed the flourishing of the aggregation for a time, and this window is now closing.

I hope this is not true, and that the aggregation could persist indefinitely if the fishing and pollution are kept at bay. Other Whyalla locals say the aggregation was as large 40 years ago, perhaps even larger than what has been seen in the best years since the fishing ban (I’ll follow all this up in another post when I have more details). Like many others, I am very much hoping that next May the cuttlefish come steaming in and resume their competitive yoga as if nothing has happened.

There is much more to say about this place. I’ll devote a later post to Giant Cuttlefish sex, and the “female impersonation” that some of the males engage in. For now I will let some more Whyalla cuttlefish, from previous years, speak for themselves, accompanied by the great David Attenborough. 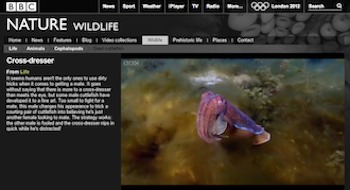 5 Responses to 5. Mystery at Whyalla