I just finished reading Life’s Ratchet, by Peter Hoffman, a book with quite a lot to say about the physical scale at which living activity arises in physical systems. The book is mostly about life’s spatial scale, but it bears directly on the temporal scale as well.

The book is philosophically useful because it unseats familiar assumptions about the physical interactions that give rise to living activity. Philosophers often think of matter in a rather dead, inert sort of way. Hoffman’s book describes the distinctive properties of the nanoscale – the spatial scale at which objects are measured in millions of a millimeter. This scale, he says, is special with respect to the the maintenance of order and non-random activity. When things are much larger than the nanoscale, they become deterministic in their operations and have the ponderous inertness that people associate with matter. When things are much smaller, they enter the atomic and then subatomic realm. Here organized activity becomes difficult for other reasons, and the structures present require too much energy to pull apart and remake. At the nanoscale, in contrast, there is a “molecular storm” inside cells that enables events to occur spontaneously – everything is exposed to a continual series of tiny collisions that can initiate events – but it is possible for complex evolved molecules (proteins, especially) to impose some order on this storm of activity. The nanoscale is also a scale at which different kinds of energy can be readily converted from one to another. (Hoffman reproduces an interesting figure from a physics paper by Phillips and Quake which illustrates this point.) His conclusion: “The nanoscale is the only scale at which machines can work completely autonomously.”

Hoffman argues that the basic processes characteristic of life (especially on the metabolic side) have to occur at certain spatial scale – not too big, not too small – and this (I add) will also constrain their temporal scale.

From these principles, one could argue that living cells have to be a certain size (no smaller, as they’d not work at all; no larger, as their surface area would become too small in relation to their volume). Questions would then arise about how indispensable cells themselves are – some organisms get by without a cellular organization, to a greater or lesser extent. And this argument about the bottom end may not constrain the top end. Once living cells, based on nanoscale activities, come to exist, larger objects can arise – objects like you and I – which are made of many cells working together. These larger objects can live life at their own slower pace. Are their constraints coming from the bottom end determining how much slower this can be?

The important ideas in Hoffman’s book are found in the first half to two thirds; it’s not as novel towards the end.

There’s a decorator crab hanging onto the bottom of this tunicate. 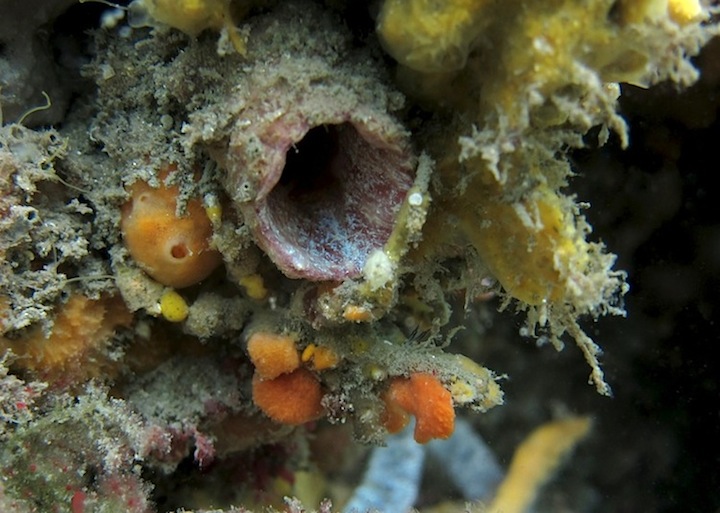