Two weeks ago I came across this mound of shells on the sea floor: 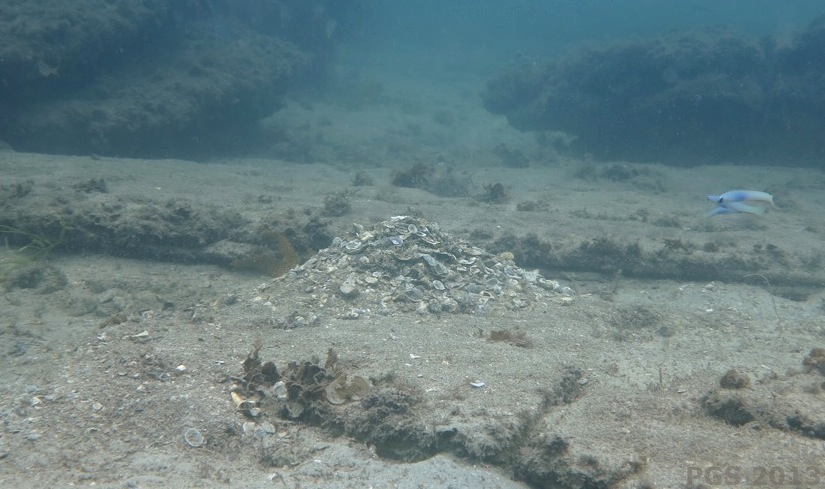 It reminded me of some posts on this site last year about fish building projects, and also of Octopolis. (The photo above is not from the first sighting, but from a few days later when the water was clearer.)

Who built it? There was a hole in the sea floor under a ledge near the Tower, and some sleek pale blue fish came in and out of it (both the hole and the fish are visible on the right of the photo above). The next day a pair of slightly larger fish, four or five inches long, were also hanging around. Both species were acting as if they owned the site.

A few days later I caught the engineers in the act; it was the larger fish, a pair of Black-Lined Sleeper Gobies (Valenciennea helsdingenii). Here they are that day: 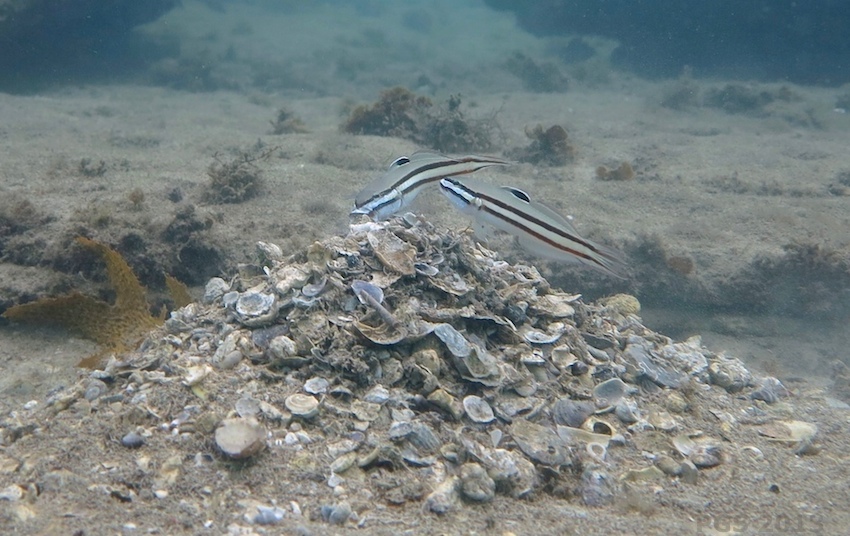 As I watched them, they divided their time between eating and building. To eat, they scooped up mouthfuls of sand and debris and and sifted it out through their gills. When building, they went a little way from the Tower and either scooped up debris or picked up a single larger shell, carried it over, and placed it, usually on the top.

They didn’t build only the main Tower; they spent some time piling up shells on another spot, about a meter away, and also poking around what looked like the entrance to a den, a hole in the sea floor, some distance from both the shell piles.

The Tower itself, measured a few days ago, is about 17 cm tall and 60 cm across its longest diameter. Here’s a video (about a minute) of its construction:

I’ve continued to visit, and it’s been quite hard to work out what the fish are up to. Sometimes they’ve divided their time between the smaller mound described above and yet another den, about 5 meters away. Apparent dens appear and disappear from day to day – I’ve seen at least six den-like holes of the same size in the area, and most have been tended at some stage.  One fish placed a piece of seaweed carefully in one den entrance, and adjusted it when the current moved it away. Today I saw them building yet another mound of shells, also about 5 meters from the Tower. They seem to be making not a nest, but a city!

Engineering by this species has been described in just one paper I’ve found, based on observations in the Red Sea, off the coast of Yemen. Some of the behaviors at this Sydney site are very similar, and some may be a little different. The Red Sea paper says that each mound has a “conspicuous entrance”; here the main Tower has no obvious entrance, though there is an opening 40 cm from its perimeter and there have been holes a little further away. The Red Sea paper says that pairs of fish tend to maintain multiple burrows.

What is the function of the mound-building? The Red Sea paper does not try to answer this question, noting just that the most usual explanation for mound-building in fish – attracting mates – does not apply here. The mounds are made by pairs which seem just about inseparable. These are, the paper says, monogamous fish. 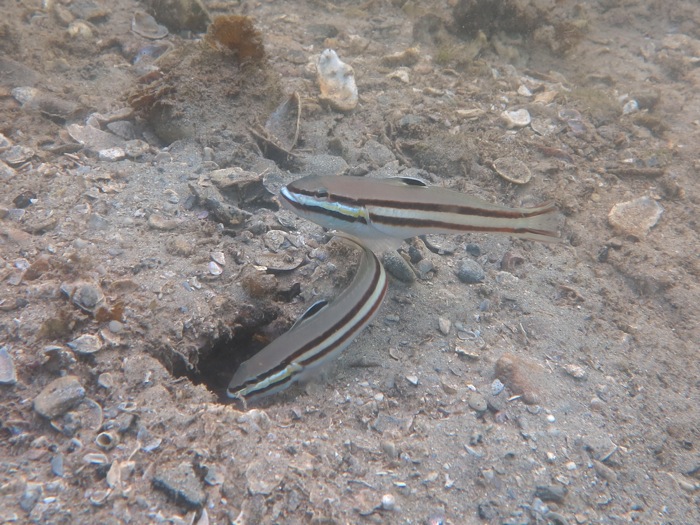 There’s a paper about mound-building in another species, closely related to these and also monogamous, by Takeshi Takegaki and Akinobu Nakazono. They argue that the function of the mounds is promoting the exchange of water in subterranean tunnels in which eggs are laid. They found, for instance, that ink injected into burrows percolated out at a higher rate from burrows with mounds than those without a mound. The fish, they say, are exploiting subtle features of the physics of water flow.

On reflection, the Sydney fish seem to be doing a mixture of what the Red Sea fish of the same species do, and what the Japanese fish of another species are doing. In the Japanese fish, only one individual builds the large mounds. This is the female, who builds while the male is below, caring for the eggs (yes, male parental care is the way things usually work in fish; a topic for another time….). That’s different from the Sydney fish, where both fish build. [** See the next post for a correction on this point.] On the other hand, the Japanese mounds have no conspicuous entrance on them; the entrance is covered in rubble and beneath the mound itself. In its design, then, the Australian fish seem to be building something closer to the Japanese style than the Yemenite. Here’s a diagram from Takegaki and Nakazono: 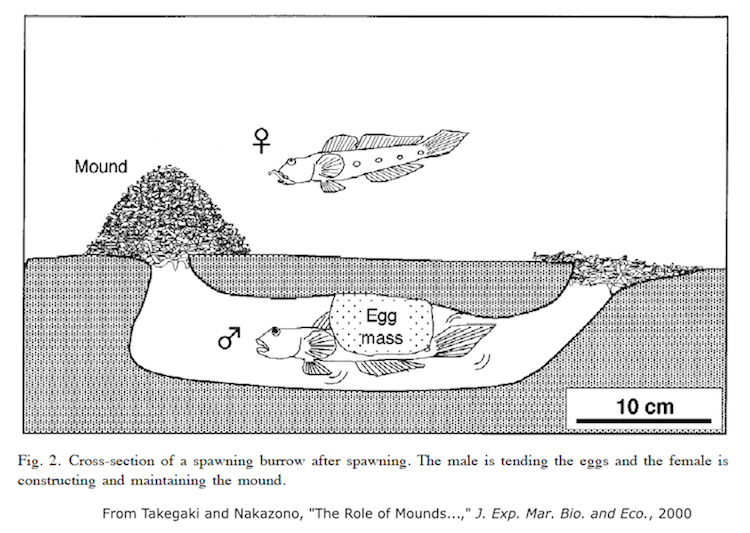 Lastly, how could a behavior like this evolve? Neither paper attempts any evolutionary speculation, so here’s a thought. The feeding behavior of these fish is a pretty short distance away from a mound-building behavior. They scoop up debris and sift it through their gills. Suppose an individual fish, a long time ago, tended to return to near its den after scooping, but before sifting, each mouthful, rather than roaming and sifting in situ?

Notes: Thanks, once again, to David Scheel for help with fish identifications and other aspects of the biology.

You might wonder whether it is clearly the same two fish doing all this at my site. I guess it’s possible that each pair completes a burrow and retires into it, leaving the water clear for another pair to start building. But I doubt it. Over these two weeks I’ve only ever seen two fish (or none) in the area at any time, and the pair certainly look the same each time I come across them.  The Red Sea paper notes that each pair maintained multiple burrows.

The Red Sea study of these fish has as its first author Eugenie Clark, also known as ‘The Shark Lady,’ and someone who seems as fearless as the name suggests.

The Clark et al. paper notes that another species of smaller, slender fish – Ptereleotiris heteroptera – hung out in the dens of the Sleepers. This is probably the same genus, though not the same species, as the blue interlopers in the first photo above.

The location of this site is Cabbage Tree Bay, one of the marine reserves whose protection the state government here is presently reconsidering – a place that may be turned soon into a tangle of fishing lines and rusty hooks. I wrote about this issue here. Please consider sending a note to the state government.